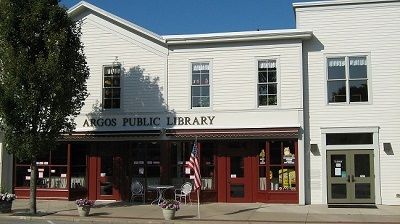 The Argos Public Library had a very modest start. In 1935, the Monday Club began discussing the possibility of opening a public library in the town of Argos. A select committee composed of Mrs. L.W. Slaytor, Mrs. S. A. Kosanke, and Mrs. Christine Tate began formulating plans that led to the formation of APL.

After searching for both funds and books, the library opened on January 11, 1936. Later, on January 25th, the Argos Boy Scouts conducted a house-to-house field search for book donations. Several moneymaking events were conducted by other interested organizations that donated much needed and much appreciated money to the new library.

It was announced on April 30, 1942 that the library would be moved to its new location in the City Building of Argos. May 5th, 1942, which was also Election Day, was chosen as the opening day. The library board had chosen Election Day since there would be an increased number of people in town who might be interested in the opening of the new facility.

Originally, the financing of the library was taken care of through donations. In 1942, however, it began to receive funds through taxation. Green and Walnut Townships were merged into the library district in 1952 so all of the community citizens would be paying an equal tax rate for library support.

Charles Schoonover, a retired local businessman, donated a historic building in downtown Argos to be used as the public library building. This building consists of two older buildings dating from the 1870’s that were joined and used for over 100 years as a retail dry goods establishment which was a major landmark for not only Argos but Marshall County and beyond. These historic buildings have been restored to their original storefront appearance to once again be an anchor for the downtown area. The APL board is committed to keeping the library downtown and making it a focus point of activities for the community.

Renovation began on October 27, 2003. Demolition of the interior and excavation were done so the addition foundation could be poured. While such old buildings seem to reveal surprises as we uncovered more of its skeleton, a pleasant surprise was the uncovering of the old wood ceiling in the north downstairs. This ceiling displays old paint in rather good condition with primitive stenciling on it and can be viewed at the library.

After a myriad of renovation set-backs, the move into the building was made in December, 2009 with the work of many volunteers and staff. The Lions Club, Argos Volunteer Firemen as well as many local patrons, friends, and staff (past and present) helped move the materials and furniture. The library opened for it’s first day of business at 142 N Michigan Street on January 05, 2010.

The public response to the library has been very positive and our circulation has increased significantly, especially all through the first year. Patrons like the comfortable feel of the building plus nearly twice the space for everyone to enjoy.

Argos Public Library serves both Green and Walnut townships which includes the town of Argos. According to the 2010 Census, we have a total of 3850 patrons, 1103 in Green Township, and 2747 in Argos and Walnut Townships.

Argos Public Library strives to be the chosen destination for patrons to obtain quality, up-to-date materials, information, and services, in order to fulfill the educational, informational, cultural, and recreational needs of the entire community in an atmosphere that is welcoming, respectful and businesslike. The purpose of the library is to serve our patrons with an outstanding collection of materials in a variety of formats.  The library will provide and actively promote easy access to all resources for all patrons and offer guidance and encouragement in their use so they may improve the quality of their lives.

GOAL I. The library board will provide a facility that is conducive to reading, learning, and meeting the needs of the community.

GOAL II. The library and staff will provide expanded library services and programming to meet the needs of the community.

GOAL IV: To improve communication between the library and patrons.

GOAL V. The librarian will recruit, train, and maintain competent and courteous staff to support the library’s operation.

Better yet, see us in person!

We love our customers, so feel free to visit during normal business hours.